By Franke James on Change.org.

With the stroke of a pen, my disabled sister’s human right to decide where she lives was wrongly taken away.

In a heart-breaking move, Teresa who has Down syndrome, was forced against her will into an old-age nursing home, by the CCAC and two of my siblings. Four days later, she was rescued by my 91-year old father who was “adamant” he did not want his daughter living in a nursing home. But then the nursing home called the police, in a shockingly callous and bizarre effort to force her back.

Teresa is demanding an apology from these two institutions, the CCAC and the Rekai Centre. This is a sorry mess. Her records show that the crisis list was manipulated to get Teresa to the very top, and placed in the nursing home. Her profile contained false information which made her appear to need 24/7 care. See the presentation I made with Teresa, to the Ontario Government’s Select Committee:

We need a full apology from both institutions because this is not just about one person — it’s about standing up for and protecting the human rights of all people with disabilities.

Teresa called the CCAC’s apology “beautiful”, but we have not won yet… The Rekai Centre has not responded. We need the Rekai Centre CEO, Mary Hoare, to offer a full and public apology for the harm they caused Teresa.

The truth is that if we had not rescued Teresa from the nursing home, she would have been living in an institution — with no right to choose otherwise — for the rest of her life. How could this happen in Canada? That’s what Teresa and her supporters want to know.

And Teresa is not the only one being hurt. Developmentally disabled people are routinely being forced into inappropriate “care”.

This is wrong. And it is having a catastrophic effect on the lives of so many people like Teresa.

Please sign our petition to help stop the discrimination against “disabled” people in our health care system.

I presented Teresa’s harrowing story to the Select Committee on Developmental Services at the Ontario Legislature. (Teresa was present and consented to her health records being shared.) You can see the slide presentation I made on January 21st, which lays out the full sequence of events.

Why is there NO accountability?

How could the rights of a developmentally disabled person be removed so easily? Teresa’s story shows how it was done, and why we need to hold the institutions, and those responsible, accountable — so that it does not happen to anyone else.

Teresa’s plight shows that there is NO accountability. This is ironic… If you drive too fast, you’ll get a speeding ticket. If you litter, you can face a hefty fine. But if you incorrectly take away the rights of a person with Down syndrome and place that person in a nursing home, NOTHING happens! There is no penalty and the health care institutions will not even say they are sorry!

After her discharge, Teresa wanted to regain the ‘capacity’ rights that the CCAC had taken away. Teresa wanted to make her own decisions about where she lived and who cared for her. So, in late December and January, Teresa was interviewed and assessed by an expert licensed capacity assessor who determined that Teresa is in fact capable of deciding where she lives.

That was a victory for Teresa! But the shocking fact is — if we had not stepped forward to protect her rights, Teresa would have been living in an institution for the rest of her life. (The group home alternative which miraculously popped up after Teresa’s discharge was no better than the nursing home. She would have been living with four other developmentally disabled people — all of whom were non-verbal, and three of whom were in wheelchairs. Considering that Teresa is able-bodied and very verbal this would not have been the optimum home.)

Teresa’s case shows that our consent and capacity laws are woefully inadequate to protect the rights of the developmentally disabled.

How were Teresa’s rights taken away by the CCAC? 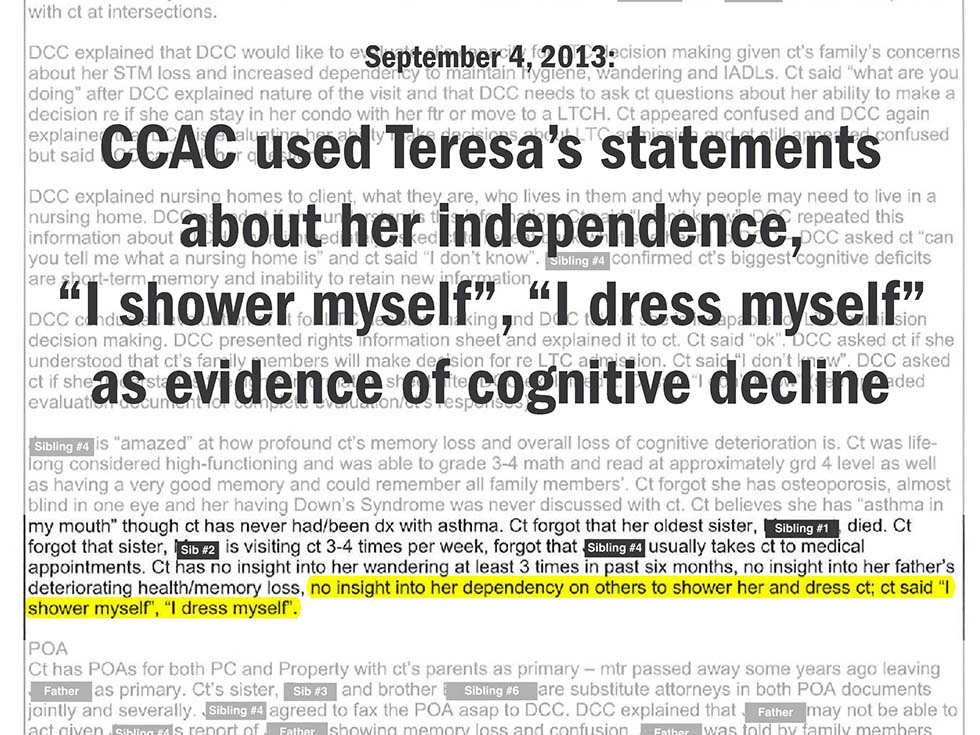 In a heart-breaking move, my lively 49-year old sister with Down syndrome, was stripped of her human rights and placed in a nursing home where she was surrounded by frail elderly people, many of whom were incapacitated and could not walk, talk or feed themselves.

Last fall, with the stroke of a pen, CCAC-Toronto wrongly declared Teresa “incapable” and recommended her placement in a long-term care institution in November 2013.

The CCAC records are riddled with false information. (I have obtained the records as Teresa’s new Power of Attorney for Personal Care.) Teresa was incorrectly described as needing 24/7 care. They incorrectly stated that she needed assistance to use the toilet and dress her lower body. Teresa was falsely depicted as a ‘wanderer’ and ‘violent’, but when those descriptions prohibited Teresa from most long-term care homes, they were retracted.

Teresa’s own statements about her independence (“I can dress myself. I can shower myself”) were used as examples of her insidious cognitive decline.

Why would the CCAC inaccurately portray Teresa’s abilities? I won’t speculate on the “why”, but the fact is that the CCAC’s incorrect health profiling enabled her to get to the top of the Crisis List, and into a long-term care home.

Why did the Rekai Centre call the police? 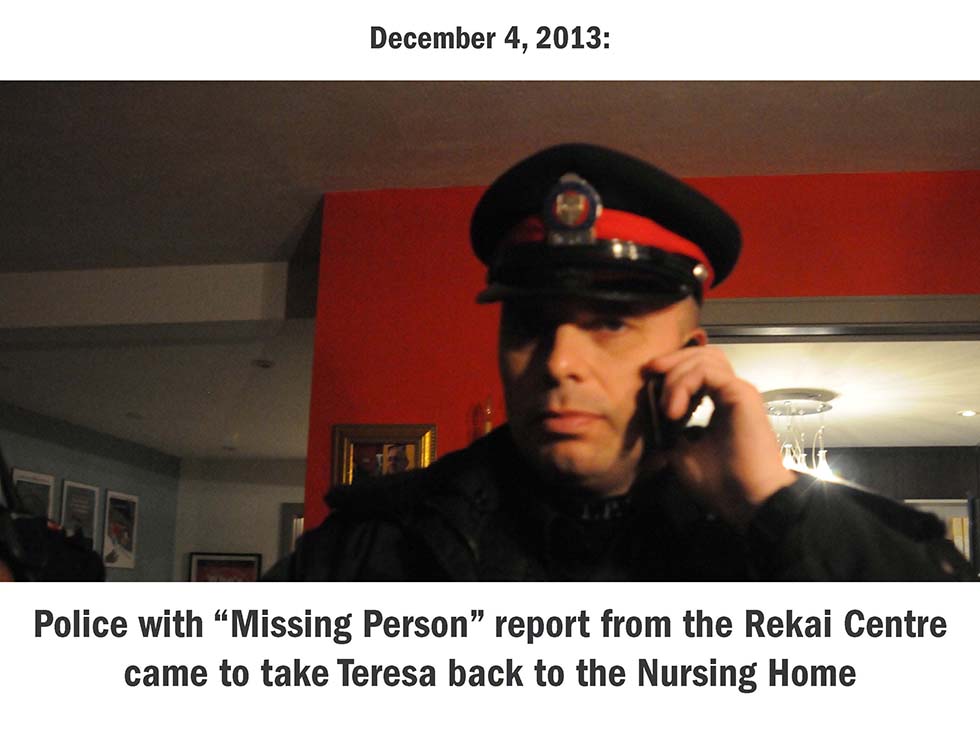 Teresa spent four days in the Rekai Centre before we could get her discharged. On November 30th, my 91-year old father who had Senior Power of Attorney, signed Teresa out. That day, I spoke with the CEO of the Rekai Centre, Mary Hoare, and informed her that Teresa would be living with me. I sent her an email on December 1st confirming everything.

But then in a move which I can only describe as cruel and callous, the Rekai Centre reported Teresa as a “missing person”. On December 4th, three burly policemen were sent to my home to take Teresa forcibly back to the nursing home.

Fortunately, the police reviewed our legal documents. They spoke with my lawyer, and interviewed Teresa herself. They concluded that Teresa was happy and safe living with me, and she did not need to be forced back into the nursing home. See more details here:

Teresa now lives with me. 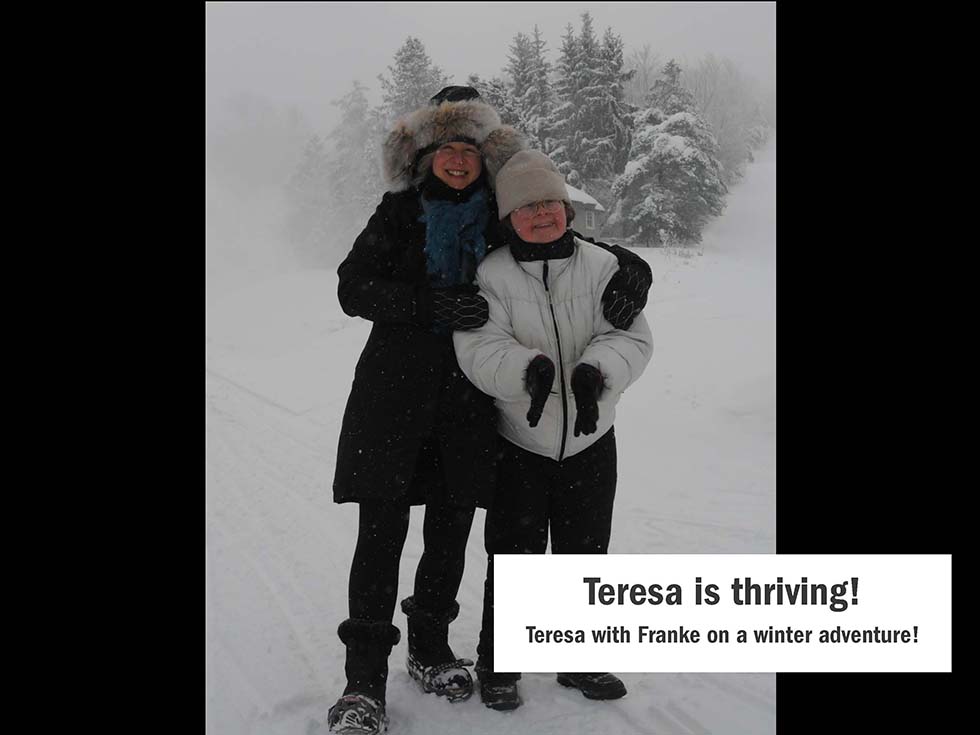 For the past three and a half months, I have been fighting for Teresa’s rights to live outside of an institution. Her right to decide where she lives has been restored and she is thriving: taking photos, walking, cooking, dancing, learning new money-management skills, and going on trips… She has accompanied me on trips to Washington, DC, Guelph, Ontario, Collingwood, Ontario, Vancouver, BC and Victoria BC. Teresa is now fully engaged in life and enjoying it! To learn more about Teresa, please visit www.teresapocock.com

We need to stand strong to protect the rights of developmentally disabled people so that what Teresa experienced does not happen to anyone else.

Please sign Teresa’s petition Thank you in advance for your support!

Disabled Forced into Nursing Homes
“In 1987, The Arc of Illinois filed a class action lawsuit on behalf of individuals with developmental disabilities forced into nursing homes who did not require nursing home care.”

1 Comment on “Human Rights Should Never Be Disabled. Forced into LongTerm Care at 49, Teresa wants apology.”