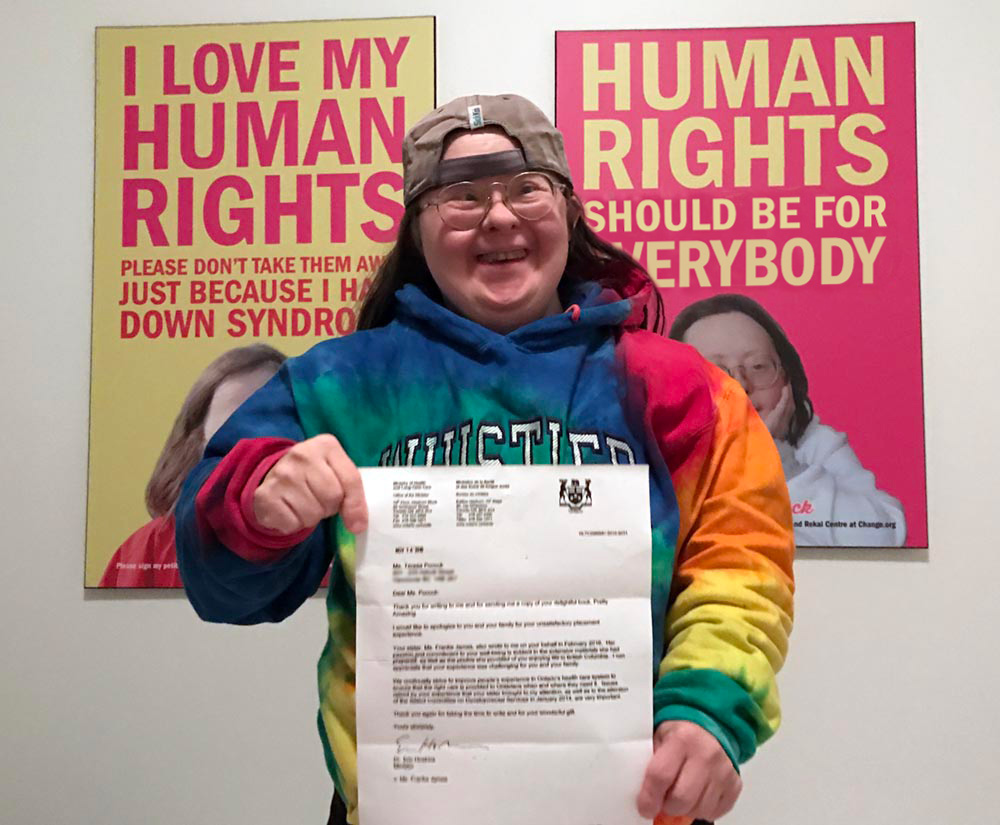 Raise your voice and shout out a cheer for this great news! The Ontario government has formally apologized to my sister Teresa Pocock who was “placed” against her will in a long-term care home in November 2013 at the age of 49. (The fallout of that experience compelled us to move with Teresa from Ontario to British Columbia, where we have lived since March 1, 2014.)

Ontario’s Health Minister Dr Eric Hoskins recently wrote, “Dear Ms. Pocock, Thank you for writing to me… I would like to apologize to you…” 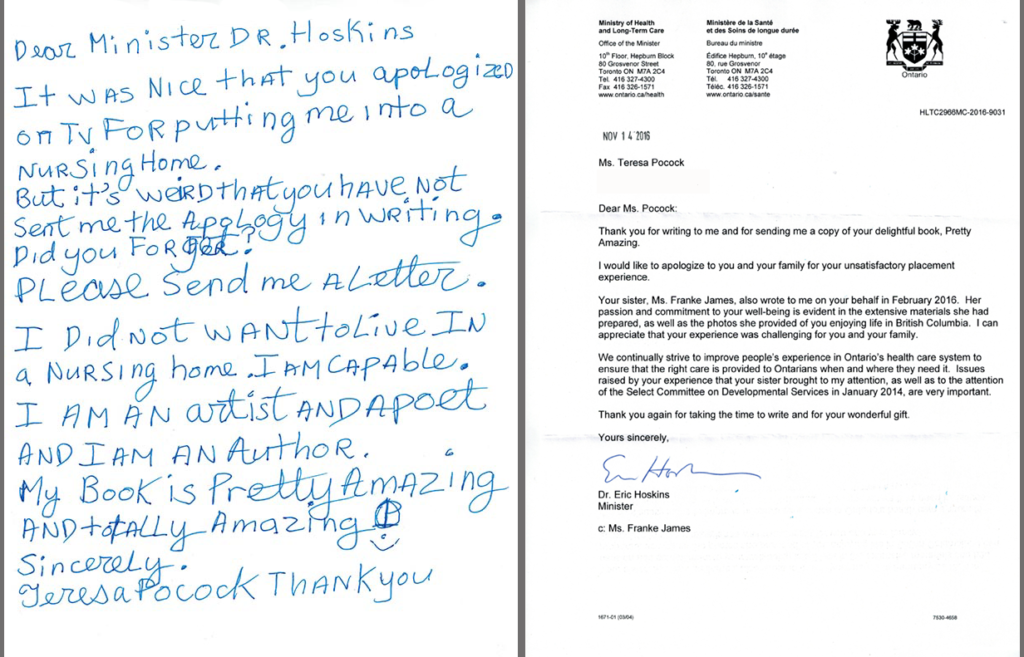 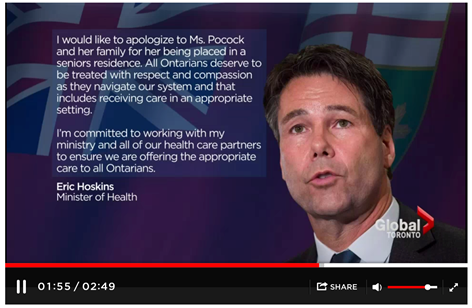 The driving force for this written apology came from Global News Journalist Christina Stevens who was determined to get answers on how this travesty happened to Teresa.

Stevens did a two-part news story about Teresa: “Ontario woman forced into long-term care wants apology from provincial government.” She did some remarkable digging to find out how many other people with developmental disabilities are in long-term care. She discovered that Teresa is just the tip of the iceberg. There are more than 2,900 “Teresas” living in Ontario long-term care facilities.

Stevens pressed Minister Hoskins for an apology for Teresa. Minister Hoskins sent a statement that was aired on Global News on July 22, 2016: “I would like to apologize to Ms. Pocock and her family for her being placed in a seniors residence…”

The Minister’s apology on television on July 22 was great news. But no letter of apology was sent to Teresa. So two months later Teresa wrote to the Ontario Health Minister and told him, “I did not want to live in a nursing home. I am capable.” See her reading her letter aloud…

Getting an apology from any government is a rare feat. The apology is a victory for Teresa and all people with intellectual disabilities. It is good to see that in Teresa’s case the Ontario government has finally admitted a mistake was made. It is good that Minister Hoskins showed respect to Teresa by writing to her personally.

Most Canadians do not realize — and I did not know until it happened to my sister — that nursing homes have become the new dumping ground for the intellectually disabled. I now see this segregation as an insidious form of discrimination. The Canadian Association for Community Living writes, “Today in Canada, thousands of Canadians with intellectual disabilities remain trapped in large, segregated institutions — inappropriately and unjustifiably segregated from society. They remain, for the most part, hidden and removed from mainstream society despite a collective knowledge, based on research and practice over the past 30 years, that with proper community based supports all persons with intellectual disabilities thrive in the community. They remain in these institutions as a result of inaction by governments and communities.”

The second sign of change is that the Canadian government is drafting legislation for a federal “accessibility law” to protect the rights of people with disabilities. It is long overdue. Carla Qualtrough, Minister of Persons with Disabilities herself said, “Right now, within our current legal framework, the rights of those of us with disabilities don’t kick in… until our rights have been violated. The current system unfairly burdens Canadians to ever defend our rights.”

If the new Canadian law has teeth half as sharp as the 1990 Americans with Disability Act and their 1999 Supreme Court “Olmstead” ruling, it could make a revolutionary difference in Canada. 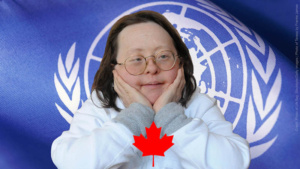 Which brings me to my third sign of change. Canada has just announced that it is in consultations to safeguard disability rights by signing the enforcement mechanism for the UN Convention on the Rights of Persons with Disabilities (CRPD). I am proud to say that my sister Teresa Pocock is the self-advocate prominently featured on the campaign poster driving that change. Teresa earned the distinction as a result of her traumatic experience being “placed” in an Ontario long-term care home against her will in November 2013. Teresa and I presented testimony about her forced placement to Ontario’s Select Committee on Developmental Disabilities in January 2014. Vice-Chair MPP Christine Elliott called Teresa’s experience “truly shocking”. 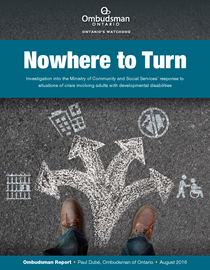 The Ontario government is facing a big crisis regarding adults with developmental disabilities. The Ontario Ombudsman, Paul Dubé, recently completed a multi-year investigation into Ontario’s treatment and care of people with developmental disabilities. On August 24, 2016, Mr. Dubé published “Nowhere to Turn,” a highly critical report on the Ontario government’s handling of the crisis, calling it a “systemic failure”.

The Ombudsman’s report detailed many heartbreaking cases, including those which amount to “a modern-day version of institutionalization.” Mr. Dubé also acknowledged that long-term care homes are providing institutional care to adults with developmental disabilities, “despite the fact that such settings can be wholly unsuitable.”
“In my opinion, the Ministry’s response to urgent situations involving adults with developmental disabilities and its administration of the process to address crisis cases has been unreasonable and wrong. I have made 60 recommendations for reform, including a requirement that the Ministry [of Community and Social Services] report back on its progress in implementing necessary changes.” The Ombudsman’s report “Nowhere To Turn” includes 6 recommendations on the inappropriate admission to long-term care homes of people with developmental disabilities. This one recommendation could have derailed the train that was determined to put my sister into the long-term care home…

21. The Ministry of Community and Social Services should actively work with local agencies to ensure that placement of young adults with developmental disabilities in long-term care homes is considered a last resort and that alternative solutions are vigorously pursued.

But despite sounding the alarm, the Ombudsman also struck an optimistic, upbeat note. He cited a new “culture change” and better leadership.

We appreciate Minister Hoskins’ apology to Teresa and accept it as a positive sign that the Ontario government wants to do better in its treatment of people with developmental disabilities. He has his work cut out for him. As Nowhere to Turn shows, and Global News’ Christina Stevens reported there are thousands of young and middle-aged people with developmental disabilities warehoused in Ontario long-term care homes.

I could have used this… The Ontario government has just opened a whistleblower hotline to report abuse of people with developmental disabilities.

The news that Ontario’s abuse hotline has been expanded is timely. Is it a result of the pressure from the Ombudsman’s report “Nowhere to Turn” and the new Federal Accessibility law?

The Government of Ontario is expanding ReportON, a new service for reporting suspected or witnessed abuse of adults with developmental disabilities.

The 24/7 phone line and email service is the latest step taken by the Ministry of Community and Social Services to further improve the safety of adults with developmental disabilities.

Abuse is often hard to identify. Examples can include being denied basic necessities like food, shelter, clothing or medicine. Even if you are unsure, but suspect abuse or neglect of an adult with a developmental disability, you should contact ReportON. Each call will be investigated and the appropriate action will be taken. People can access ReportON by calling 1-800-575-2222 or emailing reportONdisability@ontario.ca.

If the Ontario government had listened to us it would not have taken three years, 26,000 people on Change.org, the BC Civil Liberties Association, Global News coverage, disability-rights lawyers, and scores of other efforts to finally get the Ontario Minister’s attention. But then we’d never have created the campaign to raise awareness of this human rights abuse… 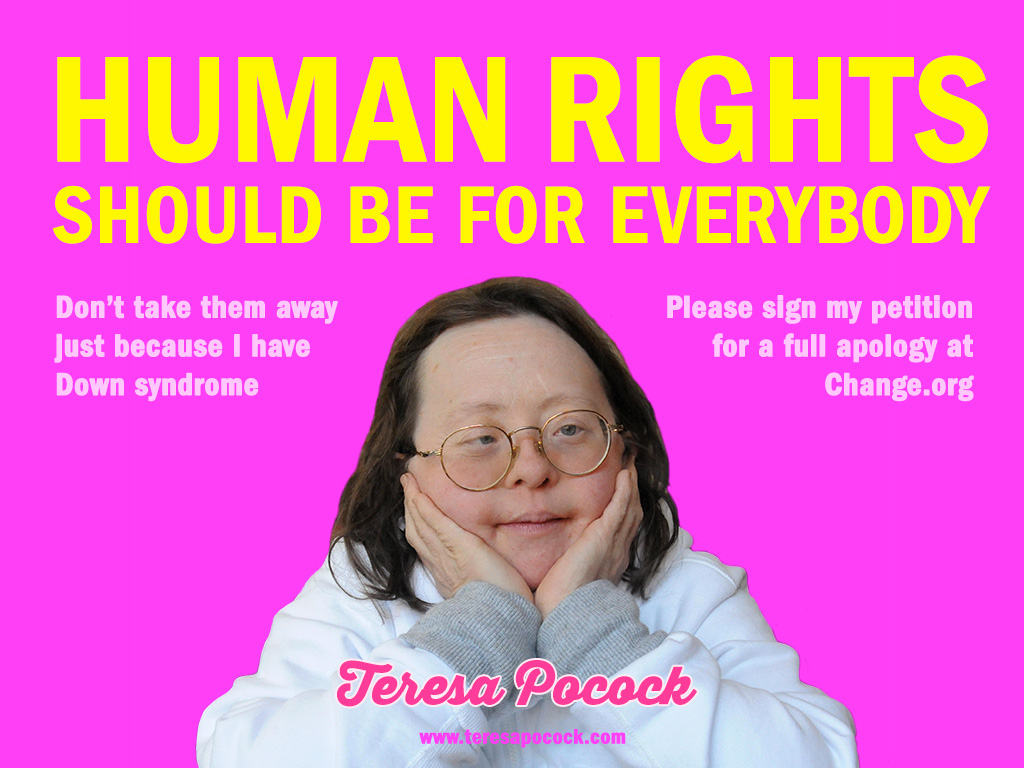 It has taken a determined campaign over three years to assert Teresa’s rights to choose freedom over segregation. Teresa’s Change.org petition, “Tell the Ontario Government Human Rights should Never Be Disabled” launched on March 21, 2014, World Down Syndrome Day. It has now amassed over 26,000 supporters and more than 2,400 comments.

Watch Teresa speaking up for herself in this video from Spring 2014:

“I’m signing because I want my daughter’s rights protected. She has Down syndrome and I too have seen people with Down syndrome in nursing homes before their time.” Lorna Aberdein, Waterloo, Canada

“I am shocked by the treatment this lady received in the name of “protection” Clearly her rights were abused and she deserves an apology for the archaic way her life was being dictated. Shame on the people involved.” Christine Bearpark, Steinbach, Canada

“I worked in a long term care home for 10 years and this young woman certainly does not belong in one. An apology would be the least the government could do for this young woman.” Mrs. Dale Pond, Markdale, Canada

Teresa is very grateful to the 26,000 Change.org supporters and the organizations who stepped forward to help her assert her rights.

On July 12, 2016, the BC Civil Liberties Association sent a letter in support of Teresa.

“We believe and support Ms. Pocock’s statements that she did not want to be put into a nursing home.” 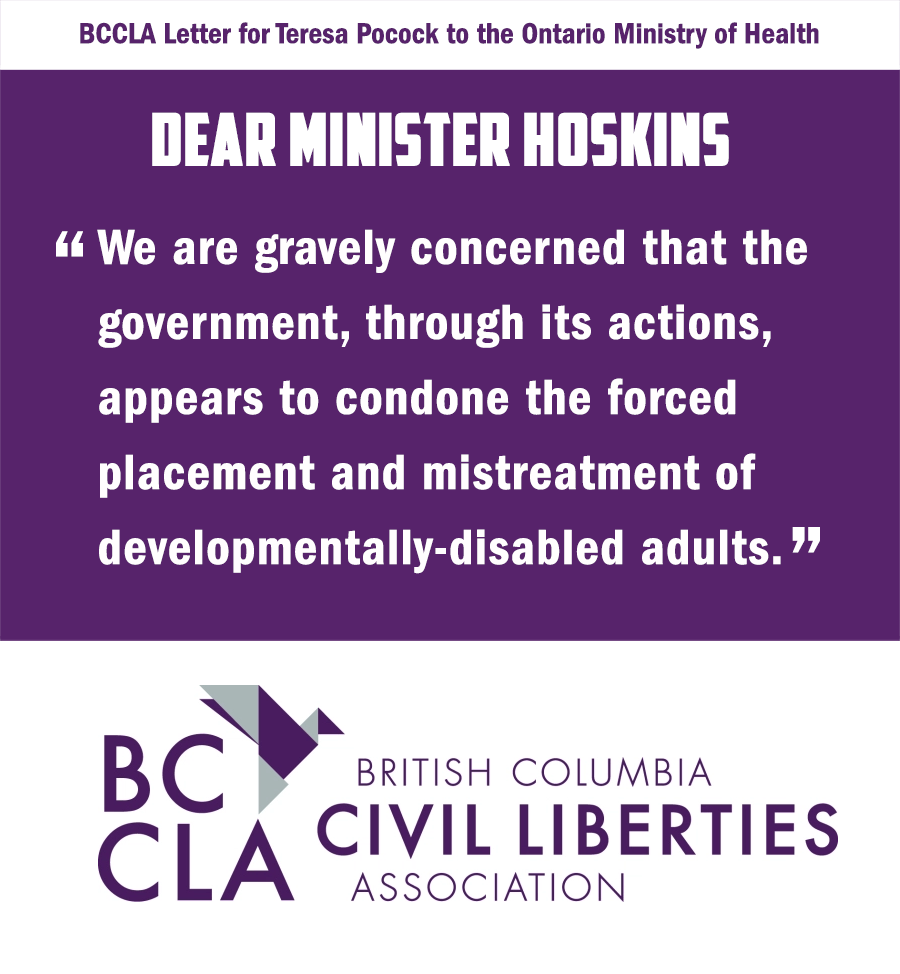 Teresa had a life to live. So many places to go! Things to do! People to meet! 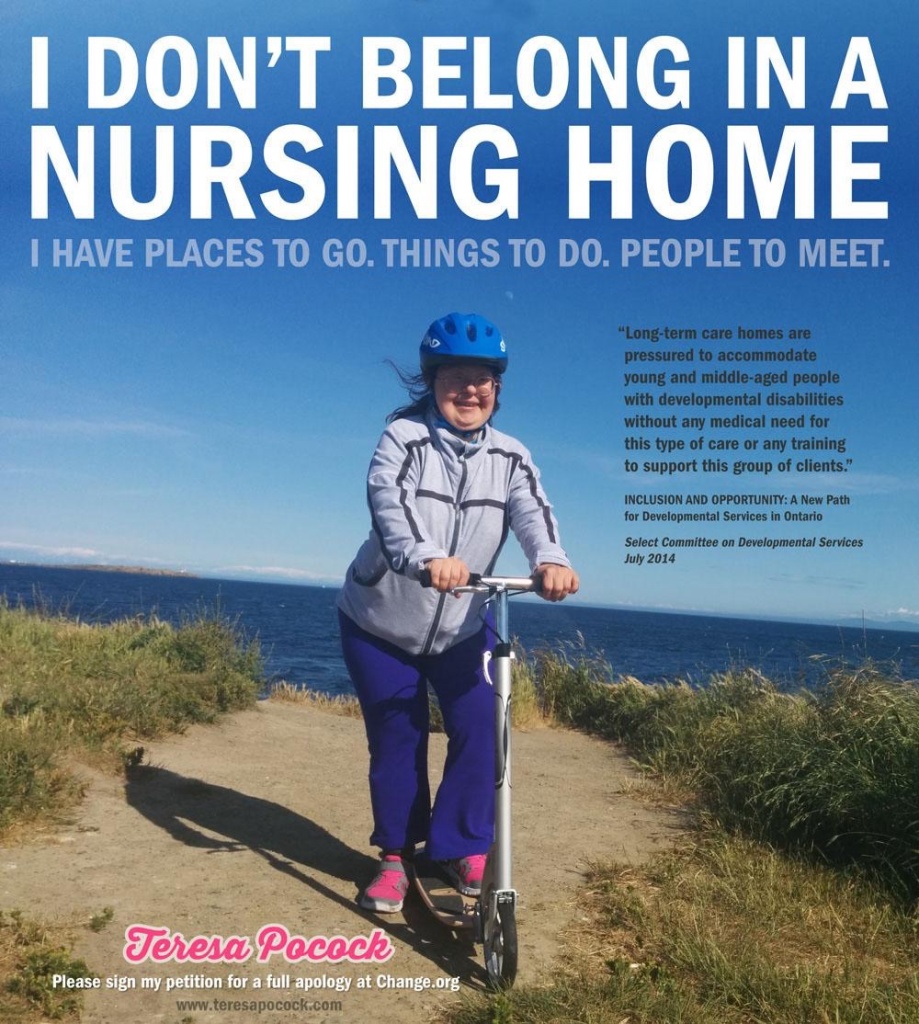 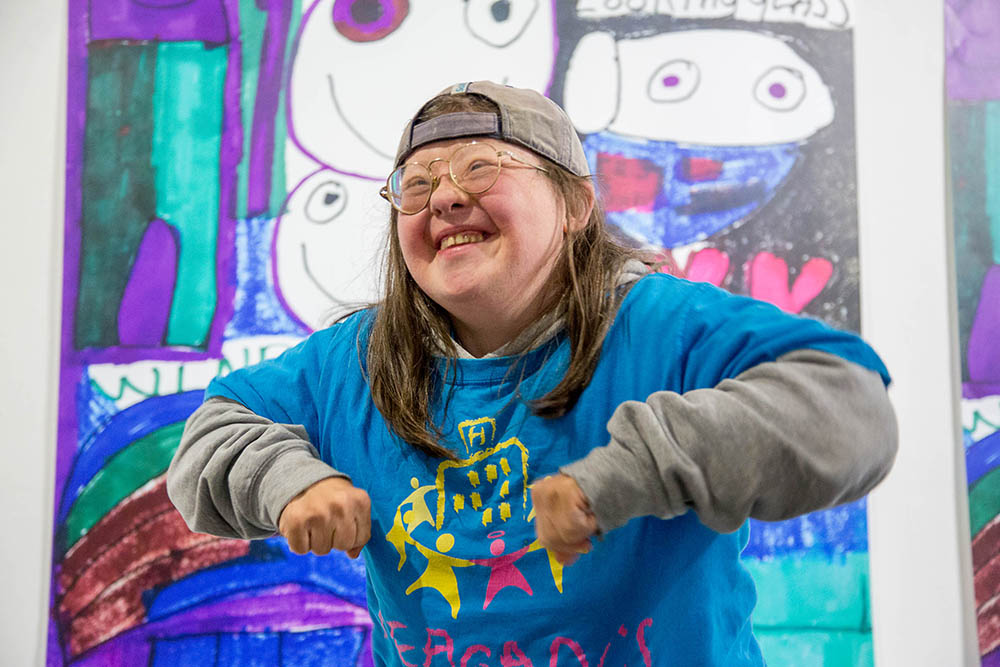 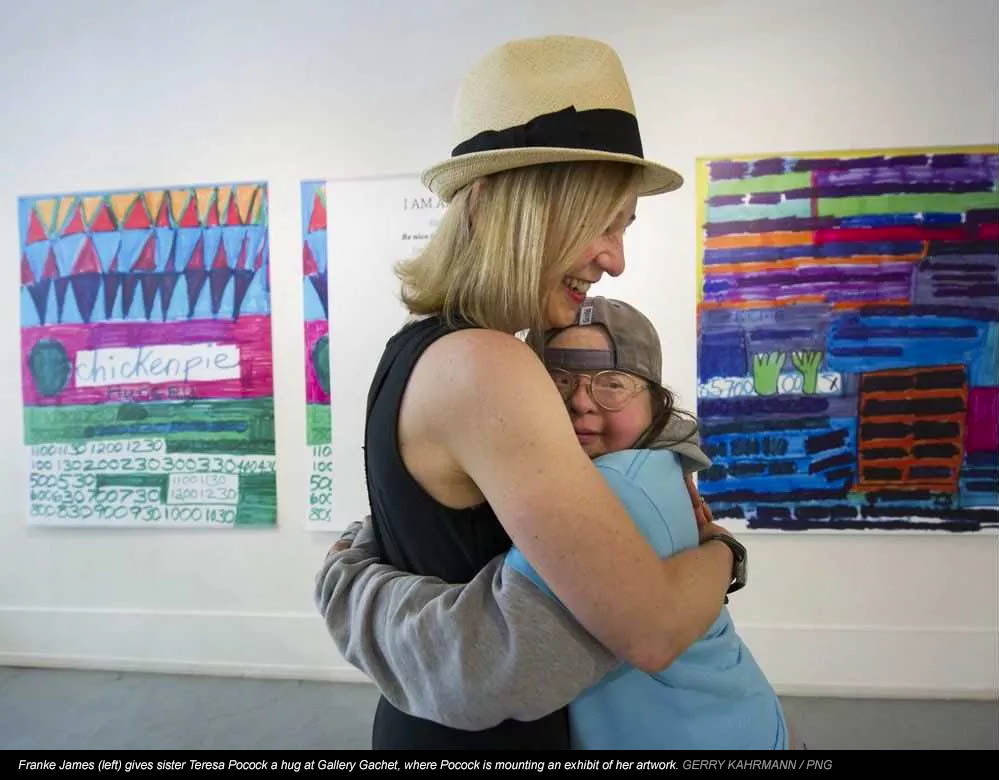 Book Launch: Pretty Amazing: How I Found Myself in the Downtown Eastside 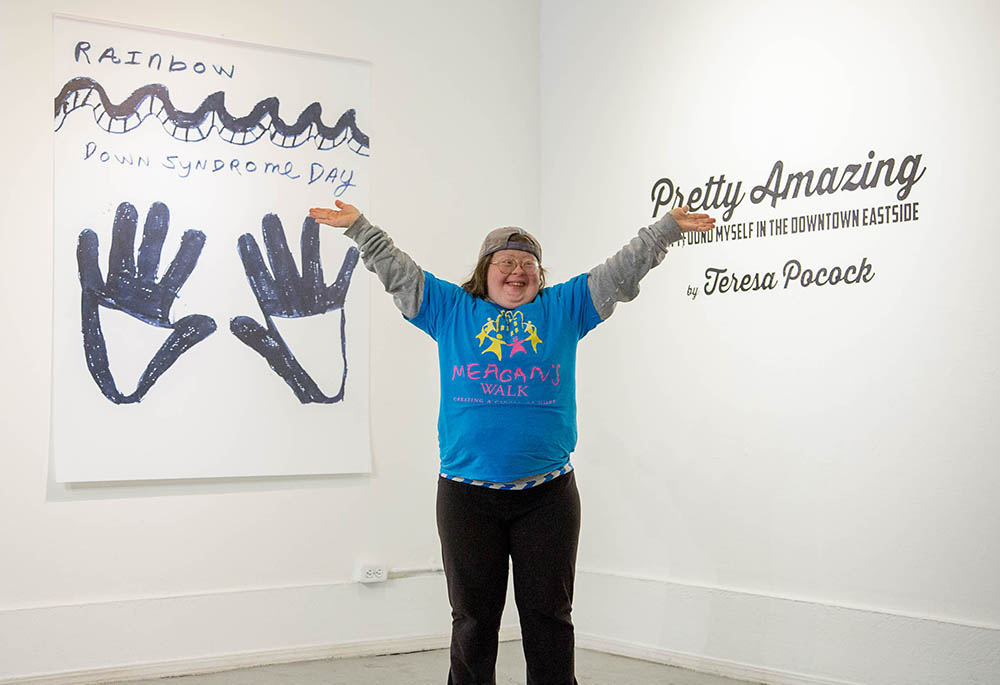 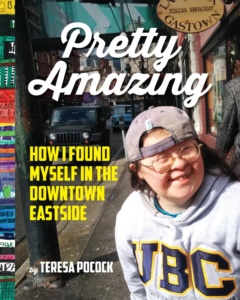 Teresa Pocock’s book: Pretty Amazing: How I Found Myself in the Downtown Eastside.

Absolute Pleasure – My Coffee Table Favorite
“Teresa Pocock’s honest writing and spontaneous word play make this book a delightful read from cover to cover. Just add in her personal illustrations, and we get an opportunity to see the world from her point of view. Her sister prefaced the book with Teresa’s astounding story of how she triumphed over systemic erasure and mistreatment to take back her rights and empowerment.”

Art, Poetry, Human Rights and Emergence
“Teresa Pocock is an artist/poet living in the downtown east side of Vancouver. Her words and visual creations are unfiltered expressions of her self in the moment. The poems show up in the form of inner dialogue, a kind of call and response thing. There’s poignancy, exuberance and freshness to these works. The visual art are boldly done in the colours and forms of her environment, the locations of Teresa’s emergence as an artist. The human rights dimension of Teresa Pocock’s life is outlined by the touching, loving introduction written by her sister, Franke James. What a story! What a book! Place yourself in touch with this adventure in becoming.”

The book cheers me up
“I was very delighted when Teresa gave me a copy of her book and signed it for me.
Once I got home and found some time to look at it I was extremely surprised by the uplifting effect the book had on me. It cheers me up every time I open it and look at the paintings or read a poem. It has a special magic to it.”

“I Am Alive” by Teresa Pocock on Vimeo.

Spring 2016: Human Rights Should Never Be Disabled. Published in the Family Support newsletter, and the Institution Watch newsletter.

July 1, 2015: How many times can the Minister of Health turn his head, pretending he just doesn’t see?

March 2015: My sister, Teresa, Just Wants To Have Fun — Outside of an Ontario Nursing Home! #humanrights –

April 2014 – This Easter, Teresa Egg-spects Apology from CEO of the Rekai Centre

April 2014 – Rock On! Teresa Power Walks for her Freedom 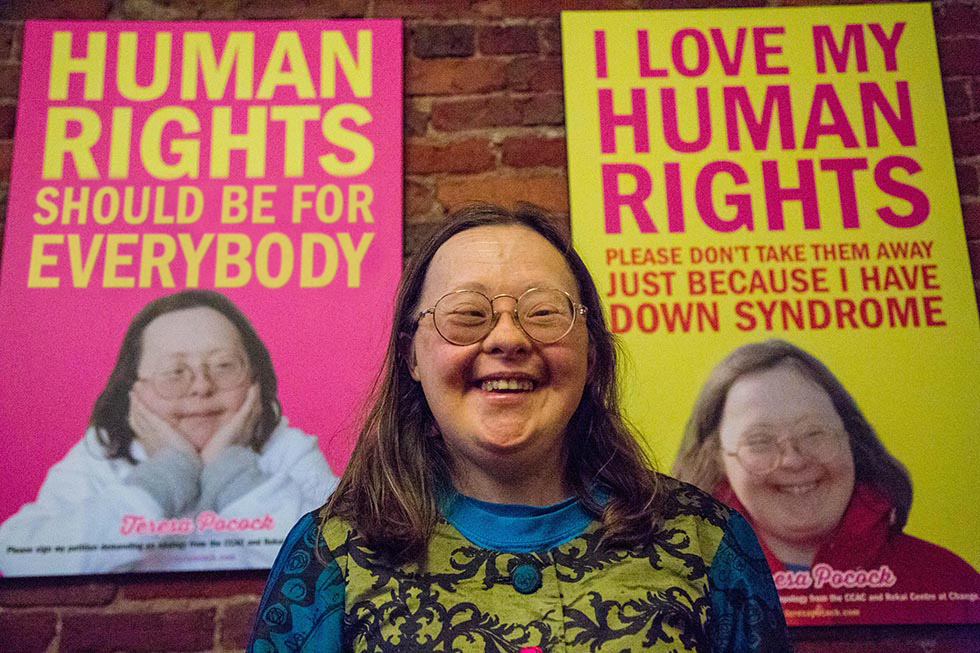 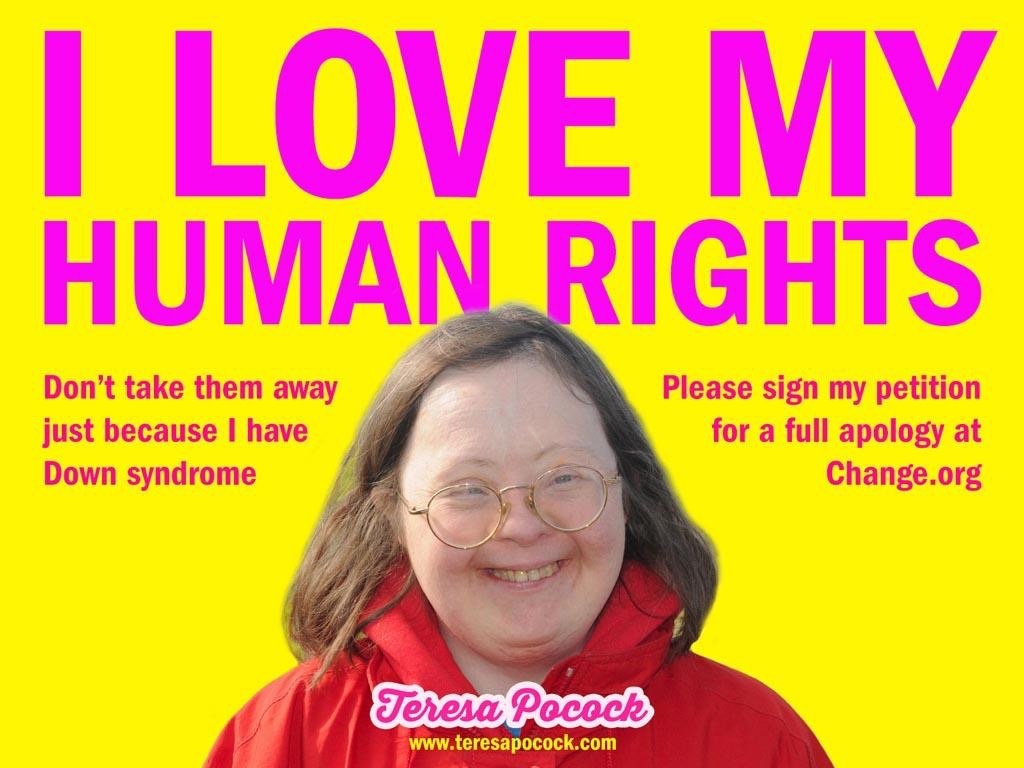